RIP Jester Man  was founded in late 2015  by Jesper Aagaard Petersen and me, and had its debut at Støy på landet 2016. The project is exploring the cut-up  techniques popularized by William Burroughs and Brion Gysin in the 1960s. Our cut-ups involves live rearranging of randomly chosen passages of spoken words and soundbytes, in an attempt to create new and enlightening narratives through chance juxtaposition and repetitions. 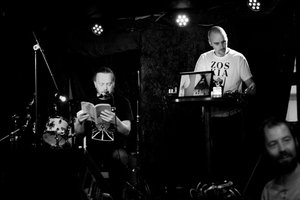